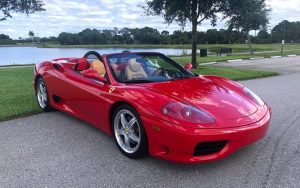 From poor at 22 to surrounded by Ferraris on a daily basis, here is how Tony Rienzi saw an opportunity and acted on it. Tony moved from Philadelphia to Florida, leaving his car washing job behind, in pursuit of high dollar exotic cars. There was one particular car that stood out and that was the Lamborghini Countach from Cannonball Run. Not only the Countach but the other poster cars from the 80’s fueled  Tony’s passion for automobiles and helped to create his success.

Tony saw a window of opportunity and he took it. After looking at the market, he noticed that the Ferrari 308’s, Testarossa’s and Lamborghini Countaches for sale were undervalued and the people that once dreamed of owning these cars were now finally able to afford them. He began purchasing these undervalued cars left and right and selling them for a huge profit through the duPont REGISTRY Magazine. He sold his first Countach to the ruler of Qatar, on his birthday and things only went up from there.

It’s easy to say that someone got lucky, but when they continue to see these trends before others and create opportunities that didn’t seem possible, it seems as though luck may only have been a small part of it.

Tony told us that a few factors of his success were attributed to the market: timing, selling iconic classics on the right venue and making sure each car was in pristine condition. After a while, things began to slow down.  Tony said, “the Countach market crashed because people drove the market passed the redline.” Essentially, people began buying and selling the wrong years, editions and bodied cars and began to negatively affect the market.

So as time passes, Tony has his eyes peeled for what’s next. Is it Acura NSX’s, Skylines, TT Supras, Panteras, Ferrari GT4’s or Brazilian race cars? Maybe even alternative asset investing. It’s hard to say, but what we do know is that when the time is right, Tony’s going to strike again and stir up the market without warning.

What I’m Working On Right Now

How a Man’s Heart Attacks Him and What to Do About It!

Get Your PJP Newsletter!

The Power Of a Pilot’s Prayer